This area naturally follows The Southern Coast section and covers the best places to visit in San Diego and its vicinity. This is southern California’s most welcoming city and one that couples its benevolent climate and picturesque ocean-side setting with important historical sites and one of the state’s largest concentrations of museums.

San Diego divides easily into several well-defined areas, each of which is best explored on foot (although you’ll need more than feet to travel between the different neighbourhoods). It could be that coastal San Diego, with its surfer-filled sands and energetic beach life, will be your major interest. If so, stay in Pacific Beach, a fine location for sipping cocktails while gazing into the sunset and for partaking of the classic Californian beach scene which prevails at adjoining Mission Beach. Otherwise, spend a nights in Downtown, where small and reasonably priced hotels are plentiful on or around the evocatively restored streets of the Gaslamp District. Staying in Downtown will also leave you nicely placed for touring the rest of the city.

San Diego’s easy-going mood may make you feel like doing nothing at all, but essential things to see include Balboa Park – a vast hunk of landscaped greenery whose Spanish-style buildings hold a formidable batch of museums – and Old Town State Historic Park, where San Diego was born with the 18thC founding of California’s first Spanish mission. Also the city’s two nationally-known features – San Diego Zoo and Sea World – and the option of a ferry ride across San Diego Bay to Coronado.

The city’s year-round mild climate means the visiting is good at any time, but expect accommodation prices to rise during the summer, and for this popular vacation city to be particularly crowded over national holidays. 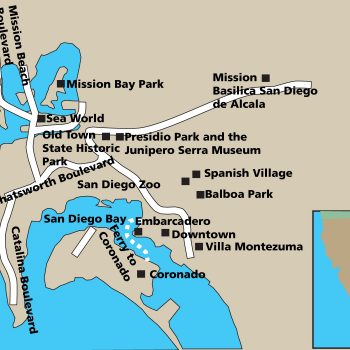 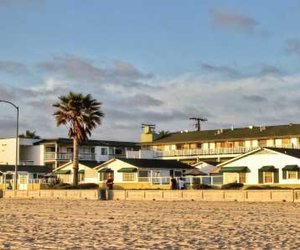 A mix of one-and two-bedroom cottages, and regular motel-type rooms, grouped around a courtyard within a frisbee’s throw of the beach 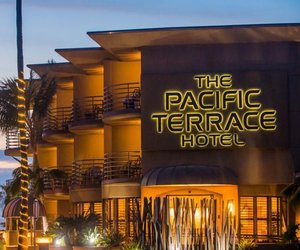 The wonderful ocean view from your balcony is just one of the things worth mentioning here. Other features include the comprehensively stocked minibars and fridges found in every room, and the light breakfast served each morning 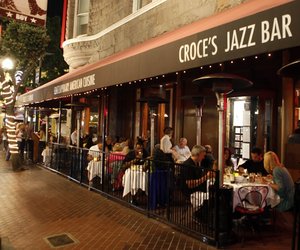 Owned by the widow of singer/songwriter Jim Croce, this is a tempting Gaslamp District lunch spot but even better for candle-lit dinners with the sounds of live jazz percolating from the adjoining bar. There’s usually a broad selection of seafood and pasta dishes on the changing menu. 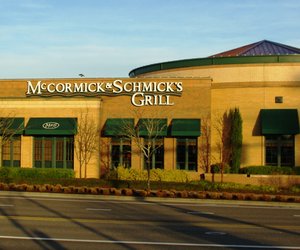 Of San Diego’s countless seafood restaurants, this one can be best relied upon for the widest choice of the freshest fare from all across the Pacific. The setting, too, is conducive to memorable eating. Reservations are recommended for dinner.