About The Northern Central Coast

The Northern Central Coast is natural California at its most inspiring. Big cities, smog, and even theme parks, suddenly become a distant memory as the landscape becomes one of scrub-covered mountains and rugged cliffs pounded by crashing ocean surf. Barely changed for millennia, this is California as it was when the Spanish arrived and several of the missions they erected remain here, some completely renovated, others reduced to ruins.

Visit this part of the coast between May and September: the weather is liable to be inclement even then; winter is sure to bring rain and vicious gales. The two major highways here are separate and have no links between them other than at their start and end points. Therefore you will need to decide in advance which course has most appeal.

The faster way, Hwy-101, is generally the least interesting, travelling inland to link dull farming towns and separated from the majestic coastline by a mountain range. In its favour, however, is the fact that Hwy-101 follows a section of EI Camino Real, the old route linking the 21 California missions, and Mission San Antonio de Padua (a well recommended detours), it’s long considered the most evocative of the lot. You’ll also find the pick of the state’s smaller wineries in the southerly portion of this route. Together, these are the region’s best places to visit.

Hwy-1 is slower but overall far more impressive, hugging the magnificent coastline and providing plenty of scope for dining in hillside restaurants above the ocean and spending nights in rustic lodges or small-town inns. With Monterey, a one-time California capital, and the beautifully restored mission at Carmel, this route earns high marks for its historical interest, too. Hwy-1 also passes Hearst Castle, a testament to human indulgence on the scale of the infinite and second only to Disneyland in popularity among visitors to California.

Unfortunately, Hwy-1 is no secret. A twisting, two-lane road, it’s bumper-to-bumper with tourists throughout the summer (weekends in particular should be avoided), when we’ve often spent more time anxiously watching the over-sized motor home in front rather than enjoying the view all around.

The quickest and easiest way to get around is the AMTRAK Coast Starlight and Pacific Surfliner trains (https://www.amtrak.com/) that travel the Californian coastline. Two/three daily Greyhound buses connect the towns on Hwy-101 between Salinas and San Luis Obispo onwards to Monterey can only be done by AMTRAK Intercity Rail Passenger Services from Salinas. There are no Greyhound services south of Monterey along Hwy-1, although Monterey, Carmel, Salinas and (summer only) Big Sur Village are linked by local buses run by MST (tel. +1 888 678 2871; www.mst.org). 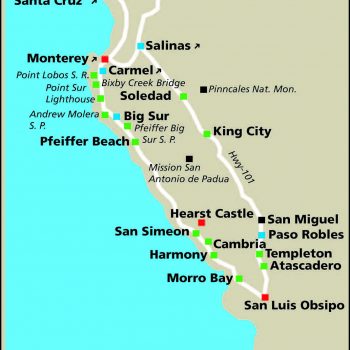 Comfortable and well – equipped two bedroomed cabins – the pricier ones include a fully equipped kitchen – on a hillside studded by pine and redwood trees. Being part of a state park – there’s a restaurant and a general supplies shop on the site – results in the cabins being quickly snapped up during the summer. If you’re arriving between May and September, book at least three months ahead. 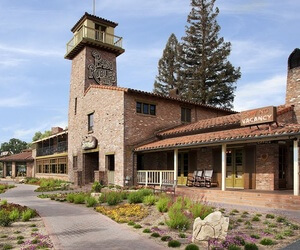 A fetching Spanish Colonial-style creation, complete with veranda and fake bell tower, erected on the site of the town’s famed spa resort. The Inn lacks the glamour associated with its predecessor but is a likeable low-key and well-priced place to stay in this enjoyable small town, particularly if you can get a room facing the lovingly-tended gardens. 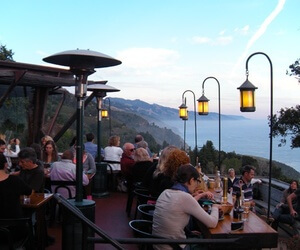 Few restaurants enjoy a more splendid location. Nepenthe is perched in a forest above the Big Sur coast in a architecturally impressive, split-level building which also houses an art gallery and bookshop. Lunch and dinner are served inside, beneath a redwood and pine-beamed ceiling or, more popularly, on the patio overlooking the ocean. There is a choice of well-prepared soups and salads, and the Ambrosia burger – a cheeseburger given the gourmet treatment – has thrilled many educated eaters over the years. Make a reservation if you come for dinner. 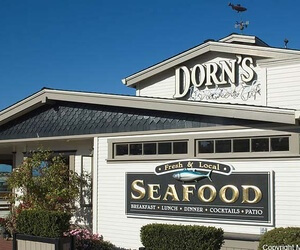 Cheaper and of no lesser quality than this fishing town’s pricier seafood outlets, you’ll find sizeable seafare sandwiches forming the core of the lunchtime menu and a couple of noteworthy-dishe specials complementing the dinner selection. Breakfast is served, too: a tempting variety of omelettes, pancakes and waffles that finds favor with many locals.