The coastal redwoods, explored in The Northern Coast and Trinity Lake, are tall indeed. But in terms of bulk, no tree, nor indeed any living thing, is larger than the giant sequoia trees which grow only on the western foothills of California’s Sierra Nevada mountains.

This local exploration, exploring of course the best places to visit in the area, can be undertaken in either direction between Fresno and Visalia and is best between April and October (though weekends and vacation periods can be off-puttingly crowded). You will witness the great groves of sequoias which stand majestic and proud in the Sequoia National Park, then continue with a spectacular descent into Kings Canyon National Park (the two parks are administered as one).

Many park visitors see no more than the largest sequoias, conveniently located a short walk from the road. Anyone with a more adventurous spirit, should include one of the region’s many caverns; and full-day or half-day hike – neither of which calls for superhuman stamina – and given the option of a detour by car to the remote southern section of Sequoia National Park.

Food and lodging take second place to nature here and our recommendations are drawn from the limited facilities offered at the parks’ handful of developed centres.

Though they may seem remarkably tame, remember that the animals you’ll see in the parks – deer are very common, and black bears by no means rare – are wild. Never tease or attempt to feed the creatures and heed the advice given with the free park information literature handed out on entry. Bears, for example, are able to smell food inside parked cars and they’ll tear a vehicle’s doors off to reach it.

Greyhound (www.greyhound.com) buses serve Fresno and Visalia, as does AMTRAK by bus and train (www.amtrak.com). During the summer a shuttle costing $15 each runs from Visalia to Sequoia and Kings Canyon National Parks – the fee also covers the entrance fee to the park. 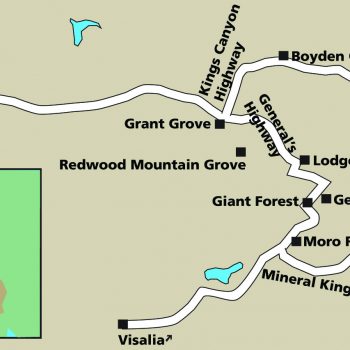 In a beautfiul location in the heart of the park, more than 100 rooms and every facility.